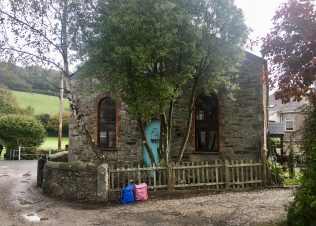 zoom
The congregation has now moved to the Sunday School opposite which is the new Methodist Chapel and this is now a private residence. (June 2019)
Jo Lewis

In 1854 the congregations were around 15 people but numbers grew with a course of revival meetings. The chapel was taken down and a replacement measuring 32′ x 30′  and 16′ high built.  It was opened on February 8th 1857 when William Hicks of Plymouth and Bro. Bracewell preached. E Powell preached in the open air in the evening to a congregation too large to fit into the new chapel. The entire cost was between £140 and £150.

The chapel is still open for worship with 9 members in 2017 and can be clearly seen in Google Street View.