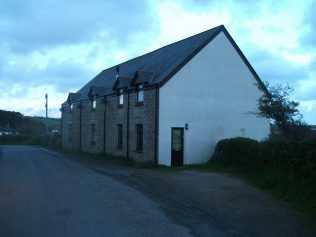 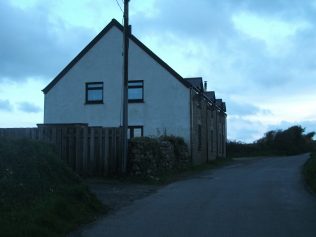 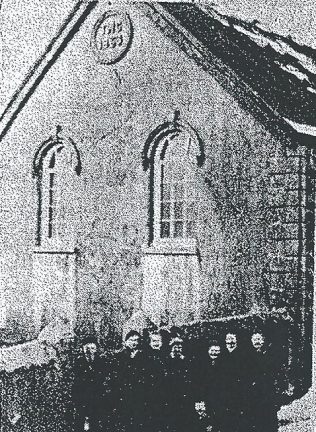 zoom
An old copy of a copy of the Chapel. Note TMC on the end wall
Unknown

zoom
Treskillard as a store. You can just make ot the original window tops
Unknown

This chapel is situated at the lovely hamlet of Treskillard, situated on a hill in the shadow of Carn Brea hill, south of Redruth, on a road leading off the road from Four Lanes down to Pool (Redruth) and Brea village (Camborne). From its position you look south west towards Troon and Newton Moor, and Condurrow (where another primitive chapel existed); and North East towards Piece and Carnkie (Redruth) where Higher Carnkie Primitive Chapel exists. Unfortunately Carn Brea hill obscures the view to Redruth and the North Cornish coast. This was farming and mining country and a number of beautiful buildings from the 18th/19th century exist.

Today the chapel has been converted into three terraced houses, having recently been converted from a store for a local cleaning company. The previous Society would be shocked to find, one house went for £168,000 in 2012. Unfortunately the plaque on the front of the chapel (which has its own story) is now missing.

The chapel was built in 1863, for 60 people. It was built on land owned by a local farmer, and cost £70 with a £35 debt on completion. It was the ownership of land that would lead to trouble, with the farmer retaining the freehold, leasing to the trustees the land.

An extension was built in 1884, taking it to its present size. This was the Sunday school room. Stones were laid by W Rambling (May 14th 1884) at the front, and Capt. W.H. Richards, Sunday school on 29th August 1889 at the rear. A leading member was John Pryor.

The Trustees had an independent streak, and in 1906 the lease for the land was renewed. The Trustees were set up as a private trust, and regarded themselves independent of the local circuit, and duly fell out with the Minister, Rev. R.H. Quick (of the Redruth circuit). To this end the Trustees altered the plaque at the front of the chapel, from PMC to TMC, in defiance. They stated the Rev. Quick had no jurisdiction over them, and held their meetings in the local Treskillard Public House( The Countryman Pub, outside Piece) where no self-respecting Minister would dare to enter.

The affair got out of hand, when the freehold owner offered Rev. Quick the freehold. He duly took up the offer, and attended the chapel to claim it. However, the Trustees locked him out, and so he climbed through an open window. He threatened to take the Trustees to court, but of course they owned the building, he only the land and so matters went unresolved.

Treskillard did not appear on the circuit membership list between 1918 and 1926. This was due to the lease held by the Trustees, who kept it until it ran out in 1926.

Troubles continued with the chapel not paying its assessment and in December 1917 it was noted they were so rebellious, they would not open their doors to the Minister attending as per the circuit preaching plan.

Such was the discord, that in 1918, 40 members were removed from the circuit roll, having refused to receive their tickets.

In November 1925, the chapel’s first assessment was paid, even though the lease had two years to go.

The affair was then forgotten.

I have no further information as to what happened after 1925 or when it closed, but am tracking down our local Methodist historian J.C.C. Probert, to see if he can advise me. The above information is taken The whole story can be found in Thomas Shaw’s books,  A History of Cornish Methodism, Methodism in Illogan, and Methodist guide to Cornwall; as well as J.C.C. Probert’s Primitive Methodism in Cornwall.