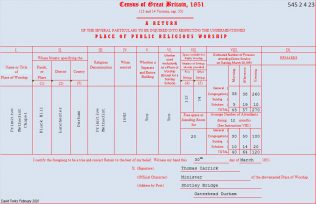 The 1921 Ordnance Survey map shows a Primitive Methodist chapel and adjacent Sunday school on the corner of Park Road and Kirk Street. On the 1897 map, there was no Kirk Street and the site was used by a Cattle Market. The chapel is still there in 1968 but by 1977 the Sunday school has disappeared and the former chapel is labelled “depot”

On Street View from 2009 there is a row of small terraced houses on the site.

However, the 1865 Primitive Methodist magazine contains an account of the opening of a previous chapel in Blackhill, although, as usual, it doesn’t tell us where.  I cannot find this chapel on maps.  Where was it and what happened to it?

“Foundation Laying, Black Hill, Shotley Bridge Station.—The necessity for, and the determination to secure superior chapel accommodation in this circuit, are evident from the fact that while we have now three new chapels nearly completed, a fourth has been commenced at the above-named place. The new edifice will consist of both chapel and school-rooms, the former accommodating 300 worshippers, and the latter 150 scholars. The style will be Gothic, and the building will cost £500.

The proceedings were commenced by devotional exercises, and a sermon was in the Presbyterian church delivered by the Rev. W. Lauder (Presbyterian). The stone was laid by David Dale, Esq., managing director of the Consett and Shotley Bridge Iron Companies, who, after pronouncing the stone duly laid, addressed the assembly in an able manner. Mr. Saul followed with a suitable speech.

Notwithstanding the unfavourable weather, we had a larger gathering and a better collection (nearly £20) than we expected. Jonathan Priestman, Esq., on behalf of the trustees, presented to Mr. Dale a silver trowel, which bore the following inscription—”Presented to David Dale, Esq., by the trustees of the Primitive Methodist chapel and school, Black Hill, on the occasion of his laying the foundation-stone, October 25th, 1864.” J. Harrison.

But the story goes back even further ;   the 1851 Census of Places of Public Religious Worship contains a Return from Black Hill Primitive Methodist chapel. The Return gives an opening date of 1842.  Does it go back further than that?

Thanks to Philip Thornborow for locating on the Ordnance Survey Six Inch map surveyed in 1857  a small Primitive Methodist chapel on the northern side of St Mary’s Street, just west of the junction with Derwent Street.  By the 1895 there is a building with a larger footprint on the site, also labelled ‘chapel’ but with no denomination label . By 1921 the footprint has changed again and it is labelled ‘hall’ and by 1963, ‘Church hall’. Was the Prim chapel rebuilt on this site in 1865 before the move to the later Park Road/Kirk Street site?