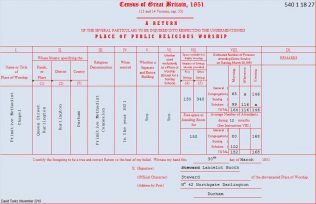 The opening took place on 3rd March 1821 and  Francis Jersey preached to 200 outside the chapel in the afternoon. “It was a blessed day”.

“On Sunday week, the Primitive Methodists opened their new chapel at Darlington.  There were upwards of 1000 persons present.  After service, a collection was made to assist in defraying the expense of the building.  This, it must be acknowledged, is not accordant with the practice of the primitive Christians.  Now-a-days, the Gospel is seldom to be heard “without money and without price.”

The 1851 Census of Places of Public Religious Worship tells us that the chapel was in Queen Street.  The Return was completed by Lancelot Booth, the steward who lived at 42 Northgate, the main thoroughfare from the north into the centre of Darlington, with his wife Eleanor, their six daughters and two sons.

Patterson, in his Northern Primitive Methodism(1909) makes this comment on page 68:

“From all points of view, the building of this chapel was a heroic achievement.  It was the first in the county, and was a capacious structure for the town, considering that Darlington then had under 6,000 inhabitants.  At the opening on Sunday, March 3rd, 1822, upwards of a thousand persons were present.  William Clowes preached in the chapel, and F. N. Jersey had an overflow congregation of two hundred outside the building. The collection is given as £17 2s.”

Queen Street is now a large commercial shopping area.  What happened to the chapel and its people?

Thanks to David Tonks for providing additional information to this account