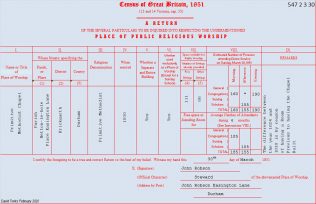 Primitive Methodism had an energetic society in Easington Lane which gradually outgrew its chapel – see the 1851 Census return.  As a result they decided to enlarge it by the addition of a gallery that seated a further 140 people. It would cost £100.

There is a record of the event by E Hall in the Primitive Methodist magazine.

On the 1884-1886 1:2,500 Ordnance Survey map, the Primitive Methodist chapel is marked on what was then Brick Garth and is now Elemore Lane, close to the junction with the A182. By 1896 the chapel has moved a little to the west, with a substantial rectangular building for each of chapel and Sunday school. Both buildings are still there in 1959. In time the chapel became Central Methodist church, but has since been demolished.