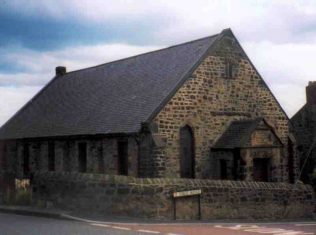 MethodistThere is only a sparse collection of records in the archives relating to this chapel and those that do are nearly all from the end of its life.

The Galloping Green PM Chapel was destroyed by fire on Sunday 29 March 1891 but the Society had already been spurred by the Gateshead PM Circuit to begin looking for another site back in the 1860s. Undaunted by the fire, the Trustees found a new plot of land at Pasture Fields (later called Jubilee Avenue) and commenced building a new chapel.

The following account was written just days after the foundation stone laying:

“For over a period of sixty years Primitive Methodism has flourished in the village of Eighton Banks perhaps more widely known by the name Galloping Green. On Sunday 29 March 1891 the chapel was destroyed by fire. The Society, after serious consideration, decided to erect a new chapel more in the centre of the population. This was felt by all to be the most desirable course enabling them to more efficiently influence the people in the locality. A most eligible site was secured on the main road from Gateshead, opposite Greenwell’s Buildings, in what is known as the Pasture Field. It is expected that this field will soon be studded with semi-detached villas, several buildings already being in the course of erection. The site measures one quarter of an acre in extent and is on the ninety nine years lease at an annual rental of £1 15s 0d. Plans and specifications for the new building have been prepared by Mr James Frazer AKIBAMSA of Newcastle who is the architect for the estate. The church will be of Gothic Structure, to seat 250 persons and at present will also be used for Sunday School purposes. The estimated cost, excluding furnishings, will be close upon £700.

On Saturday August 29th, the founation service was held. The weather being fine several of the friends from Gateshead drove out in brakes and others in carriages. Eighton Banks presented quite a holiday appearance. A large procession led by the Rev. H Pratt and Circuit Evangelist Mr Williams, marched from the Mechanic’s Hall to the service, singing in true Primitive Methodist style “All hail the power of Jesus name”. After singing and prayer and a lesson read by Mr Williams, the foundation stone was laid by Mrs J J Robson of Gateshead who placed a donation of £25 upon the stone. The minister then presented Mrs Robson with a most beautiful and unique illuminated address prepared by Mr Connel, artist. Mr Pratt in making the presentation, referred to the deep interest and practical sympathy evinced by the lady and her husband, Councilor L J Robson and family, with the work of God on the station. Mrs Robson responded in a few well chosen words expressing her appreciation of the earnest efforts of the good people of Eighton Banks.

Memorial stones were laid also by the following ladies and gentlemen who each contributed £5 towards the building fund: Mrs William Carr, Miss Gowland, Miss Lambert, Miss Gray and Mr John Thubron. Mrs Gowland also laid a stone and handed over £1 1s 0d. Each of the above were presented with addresses by the Rev’s W Johnson, A Ward, G Armstrong, W S Barrett and W Williams.

A rather sad feature of the proceedings that for a time cast a deep sadness to fall upon this bright and happy throng arose from the circumstance that the last memorial stone was to have been laid by Councillor Roger Errington of Sunderland, who had been called so unexpectedly to the higher service in heaven. There were very few dry eyes as the Minister told how Mr Errington was the first to say that he would come and help an old friend and contribute a £5 note. The stone was laid by Rev James Young amid profound and sympathetic silence. A collection was taken amounting to over £5 after which a most eloquent and spirited address was delivered by their old friend, the Rev. James Young, of Hexham secretary to the building committee.

Over 500 persons partook of tea in the Mechanic’s Hall, gratuitously provided by the ladies of the congregation. In the absence of Alderman W D Stephens JP, the Circuit Steward Mr William Carr, presided at the public meeting which was of a very enthusiastic character, every available space being occupied. Stirring addresses were delivered by the Rev. G Armstrong, A Ward, W Johnson, W Barrett and W Williams, and John E Gowland and Brother Scope. The report as presented by the Rev Pratt showed that the days proceedings amounted to over £160. The Durham Road PM Choir under the leadership of Mr Ralph Rickaby, rendered choice selections of music. The treasurer had received £200 insurance money and negotiations were going on for the sale of the old chapel property for £100; this added to the day’s takings and with what might be expected at the opening services, will put the new Trust in a very sound financial position. The usual votes of thanks brought these very successful services to a close”.

The lack of available records leaves a large gap between this report to the Quarterly Meeting and the first available source – a volume of Leader’s Meeting Minutes beginning in 1966. We know from other sources that membership had begun to dwindle around 1964. In 1972, the Mount Chapel (ex UMFC, ex WM) amalgamated with Jubilee Avenue and services were split between the two buildings until the Mount finally closed on 1 September 1981. In May 1995, Wrekenton Methodist church invited the 15 Eighton Banks members to consider a union and after much discussion this was agreed too.

The final service on 28 April 1996 was led by Rev. Stephen Lindridge. On this occasion Wrekenton Church choir sang and the chapel was packed out. Following the removal of artifacts from the chapel – mostly to Wrekenton – the building was sold and has since been converted into two very fine houses.