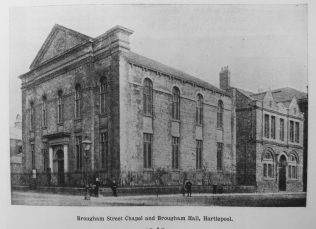 The town was first missioned by Mr Lazenby in 1822.  In 1825 under the guidance of Mr T Oliver of Sunderland a society was established.  They met in a granary rented from Mr J Cambridge and in 1830 the first chapel was built on the Croft. The town expanded rapidly and after a lapse, numbers grew; side galleries were added in 1833.  By 1850 they had decided a new chapel was needed  – and much of the initial money was raised by “ladies with well-furnished baskets”, an excellent bazaar and tea meetings, the first for 500 people.

The foundation stone was laid on March 27th 1851 with an address by Mr H Hebbron of Sunderland  The opening took place around Sunday 7th December 1851 with sermons by Mr Harland and Mrs Hallam of Ripon, Mr T Smith (North Shields) and J Dodsworth of York.

Mr Dent finishes by pointing out that the chapel is located almost directly opposite a new Catholic church “and within speaking distance of it, as if on purpose to bid up its protest against the errors, the corruptions and the arrogance of Rome.”

The chapel closed at the end of August 1959 with most of the congregation going to Central Estate Methodist Church.  It was demolished in 1964.

There are photographs on the Hartlepool History Then and Now website.