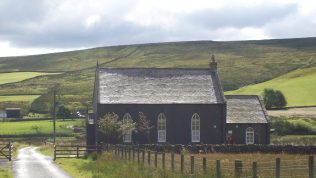 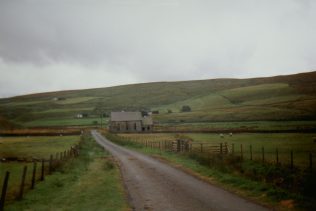 The Primitive Methodist chapel was built in 1860 and closed in the 1990s.

“In the early eighties the Misses Thompson had much success at Middleton and Lunedale; and in 1895 W. Swales, now a successful minister, had abundant fruit at most of the places in the circuit. At Harwood a whole family named Anderson was converted through the instrumentality of a girl. In his eagerness to get to the penitent form, her brother vaulted over the pew back. That youth is now a respected evangelist.”

When the photograph was taken in 1998 the chapel was semi-derelict and for sale.  Google Street View in 2009 shows it used as a house.   It is miles from anywhere, the only building within sight alongside the B6276 overlooking Selset reservoir.  Where did the congregation come from?

Patterson, William M. (1909) Northern Primitive Methodism: A Record of the Rise and Progress of the Circuits in the Old Sunderland District. Dalton, London