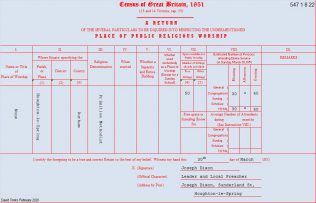 We are told by William Saul in an account in the 1855 Primitive Methodist Magazine that there had been a small society in Houghton-le-Spring for many years – here “the celebrated Bernard Gilpin formerly preached with great success” – but they needed a home of their own.  The 1851 Census of Places of Public Religious Worship shows a society where 30-40 worshippers met on Census Sunday.  Houghton-le-Spring Primitive Methodist chapel was opened on September 16th, 1855, when the Rev. R. Fenwick of Newcastle and Mr. T. Gibson of Sunderland preached.

In 1855 they bought a building on the east side of Sunderland Street and converted it so there was a chapel upstairs and a cottage below. Thanks were due to Mr. Joseph Dixon in particular for his “untiring diligence in aiding the progress and completion of the business”

In 1980 the Primitive, United and Wesleyan chapels united in a new chapel a little further east on the same side of Mautland Street which is still open in 2017.