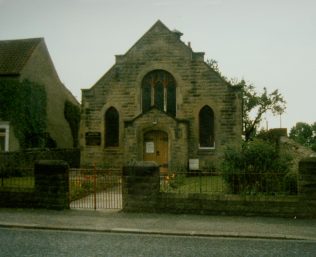 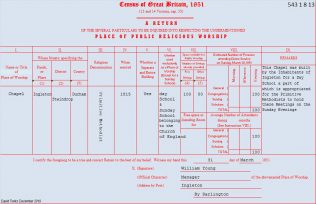 Both the founders of Primitive Methodism visited Ingleton.  The Ingleton society of fifteen members was formed by William Clowes on June 5th, 1820 and was the first band of Primitive Methodists in the old Sunderland District.  Hugh Bourne visited in 1831.  The Society used the village school for meetings.

The last Ingleton Primitive Methodist chapel was built in 1907, with the stone laying ceremony taking place on the 6th of July.  The building cost £500 and the land was a gift from Mr John Thornton.  The builders were Mr R. C. Homer and Mr G. Beadle, both from Ingleton.

“Ingleton must be for ever regarded with peculiar interest by Northern Primitive Methodists because of its being the first place in the county of Durham in which a society was formed, John Emerson, Richard Fryar, and William Young having the premier positions in the original class-book. Soon it will have completed ninety years of its existence ; and whatever may have been its changing fortunes in that time, Primitive Methodists of spirit and enterprise compose the society now, for in 1907 an artistically designed new church, of which T. E. David son and Son, Newcastle, were the architects, was erected in the centre of the village. Men and women planned on a generous scale have been nurtured in Ingleton society. Such in a conspicuous degree were the men already named. Margaret Raine also holds a high place on its roll, and it gave M. Hornsby to Saltburn, than whom the district has had few better men.”

The chapel closed in 2013; the Northern Echo report is thoughtful and understanding.  It has been sold for conversion into a house.

Northern Echo 2013 report on the closure