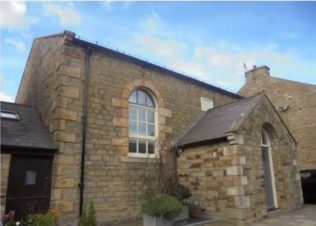 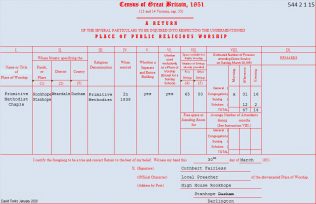 Mr Vickers let the society  have as much ground and stone as they wanted for five shillings – but the deed cost £5. The chapel measured 24′(l) 18′(w)  and there was a house under the chapel.

The Return from Rookhope Primitive Methodist chapel in the 1851 Census of Places of Public Religious Worship was completed by Cuthbert Fairless, who was a local preacher. The chapel help 115 people, 65 in free seats, and on Census Sunday 31 people attended in the afternoon and 16 in the evening.  There was also a Sunday school with 12 scholars in the afternoon and, interestingly, 2 in the evening.

Ordnance Survey maps show a Primitive Methodist chapel on Chapel Row (now Chapel Terrace) in 1861. Interestingly, between the 1895 and 1896 maps, the chapel moves to the opposite (western) side of the road. It is still there in 1953 but disappears by 1977.