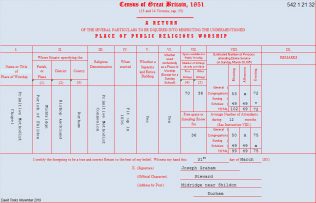 Midridge (Middridge) Primitive Methodist chapel in the Darlington Circuit was opened on August 10th, 1856, with sermons by the Revs. H. Hebbron, of Gateshead, and P. Clarke, our worthy superintendent. The previous day, a tea-meeting was held, and a public meeting addressed by Messrs. H. Hebbron, P. Clarke, P. Garrick, C. Heslop, and E. Warters; it was well attended despite the inclemency of the weather.

The site was an old copyhold cottage and garden, which was purchased and presented in the year 1851, by Mrs. Ann Burton. When she died in 1855, she bequeathed £200, to help the cost of building. It measured 31 feet by 24 feet inside, and 15 feet 6 inches high from floor to ceiling; the roof is covered with blue Welsh slates; the floor was boarded; it seated 200 people.

The opening is described in the Primitive Methodist magazine by Joseph Graham.

The chapel is marked on Ordnance Survey maps until 1939, located on The Meadows.  On Google Street View there is no sign of a former chapel.