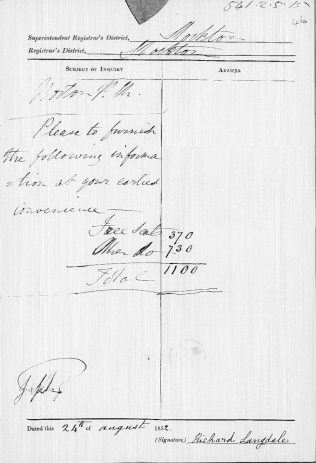 David Tonks tells us that Norton,  just north of Stockton, was first visited by the Primitive Methodist pioneer Samuel Laister on 15 May 1821.

Primitive Methodist Returns to the 1851 Census of Places of Public Religious Worship would normally be completed by an office holder – typically for the Prims this would be a Minister or Steward.  The Return for Norton was signed by Richard Langdale, the Registrar of Births, Deaths and Marriages, and dated 24 August 1852.  We do not know why the Return was not completed at the end of March as expected.

The Return presumably updates the information already held by the Census Office with the numbers of ‘sittings’ – 370 ‘Free’ and 730 ‘Other’ – a total of 1,100 seats in what must have been a substantial chapel.

In the 1867 Primitive Methodist magazine we learn from W. Saul and P. Yeoman of the opening of a replacement chapel.

“Norton, Stockton-on-Tees Station. — Opening of the Grey Rooms as a Chapel.—In this pretty, wealthy, and expanding village, with at present 3,000 inhabitants, our cause has been all apology for many years. It is said that for the most part our out-of-the-way meeting house, with, in many cases, an unedifying supply of preaching services, have mainly contributed to keep the cause low.

Be this as it may, about six weeks ago, a valuable property, known as the “Grey Rooms,” erected seven years ago, and until lately occupied by the Norton Institute, has been purchased from Timothy Crosby, Esq., and formally opened during the last few days. The above-named gentleman, who is a member of the Church of England, presided at the concluding public meeting, which was of a very interesting character.

The building is from front to back 65 feet, and 22 feet in width, inside, containing a front room (which is to be used as a Sabbath-school), a handsome public room and gallery, which are appropriated for a chapel, and altogether affords accommodation for 350 persons. It is lighted by five windows, the one in the east end being 12 feet by 12—a very light and elegant feature ; and in the circular top are placed the five expressive Saxon words—Home, Heaven, God, Faith, Freedom. The ceiling contains a good cornice, and is furnished with a centre-light, composed of seven stars, each containing nine jets, which diffuse a good light all round—the gallery being lighted by a chandelier.

The chapel has been furnished with pewing, and, made very comfortable. The entire outlay is about £550, and though up to this date we have only raised about £60, we indulge a hopeful confidence that the well directed efforts of our friends will shortly enable us to announce that, as a commercial transaction, the building will prove a successful purchase.

The opening services were both remunerative and beneficial ; considering also that our roll of Church members and the Sunday – school have of late encouragingly increased, we indulge the hope that the glory of the latter house will exceed the glory of the former, and that it may be filled with ardent and truly devoted worshippers of him, who doth ” Before all temples, The upright heart and pure prefer.” Messrs. John Tweedy and Joseph Appleton, of Stockton, and Messrs. Yeoman, of Norton, have each subscribed £5, which very inadequately represents the value of their ready and liberal assistance in many ways. “

The 1871 Ordnance Survey map shows a Primitive Methodist chapel, complete with graveyard, at the eastern end of The Green.  By the 1898 map the same building is marked as Friends Meeting House. It is still in that use on Streetview.