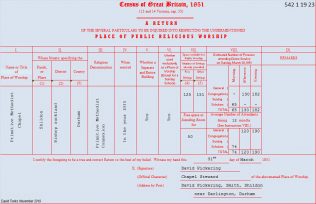 The 1835 Primitive Methodist magazine contains an account by W Towler of the opening of Shildon Primitive Methodist chapel.  Opening services took place on May 11th 1834 and the chapel is described as a “plain substantial stone building”.  The Society had 40 members.

Nineteen years later, the Primitive Methodist magazine of November 1853 contains a brief note by Thomas Russell of the re-opening of Old Shildon chapel – Old Shildon because by then New Shildon had become well established. The chapel had never been painted and now needed repair. The sermon at the re-opening service on September 4th was preached by Robert Clapham of Yarm; two souls were converted.

Learn about the new chapel here.

There was also a Primitive Methodist Church in St John’s Road, New Shildon.