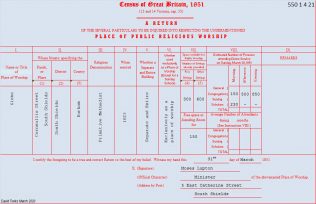 He describes the chapel as commodious and seating nearly 900 – a significantly large chapel for the time.

Although the magazine report doesn’t give any further clues as to which chapel it was, see the comments below which identify it.

In the 1846 Magazine J Day describes the re-opening of the chapel after repairs, painting and cleaning had been done to it. Re-opening services started on May 24th 1847. The account matches the earlier account the large size of the chapel, saying that it cost £1,600. However, there  is a small variation in the year of opening. Presumably the more accurate date is the one written at the time.

There is a further account (by JA) in the Primitive Methodist magazine of June 1866 describing the rebuilding of the chapel, but also giving further detail of the first chapel. Things had not been straightforward with it;  it had cost £1,600 and when it first opened they could not afford pews or other basics, and the first years were “hard struggle”. However, things improved, the society grew and the accommodation especially for the Sunday School was inadequate.

The chapel is shown on Ordnance Survey maps of 1858 at the junction of Cornwallis Street and Coronation Street.  By 1896 an engineering works is shown on the site.

You can see pictures of the later Glebe chapel on this page.