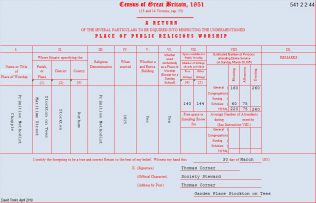 The Primitive Methodists in Stockton held their first camp meeting in 1821 and had a room in Playhouse Yard.

According to Whellan’s History, topography and directory of Durham of 1856 (p. 568) this chapel was erected in 1825 and contained about 350 sittings.  It replaced an earlier place of worship in Play House Yard.  Volume I of Mackenzie and Ross’s An historical, topographical, and descriptive view of the County Palatine of Durham … (p. 35) adds that their first Camp Meeting was held on St Swithin’s Day, 1821.

According to J.W. Fawcett in his Memorials of early Primitive Methodism in the County of Durham 1820-1829, 1908 (p. 31) Stockton was the site of the second Camp Meeting to be held in Co. Durham.  This was on 15 July 1821, a week after the first County Durham Camp Meeting in Darlington.  He quotes Samuel Laister’s Journal “Sunday, July 15th.  We had a Camp Meeting at Stockton.  The day was wet and unfavourable, but I believe Stockton, hard as it was, hath never forgotten that day’s labour.  Souls have since been saved.  Praise the Lord for ever.”

There is a report of the opening in the Primitive Methodist Magazine, 1826 p. 142.

The Durham Chronicle of 3 September 1847 (p. 5) advertised “A Copyhold Building in Smithfield, in Stockton aforesaid, the upper part of which is used as a Chapel or Meeting House of the Primitive Methodist Society, and the lower part is let as Dwelling-houses.”

The chapel was still in operation in 1851 (with the address Maritime Street rather than Maritime Yard) and was reported by Thomas Corner to the Census of Places of Public Religious Worship carried out in that year. Evening attendance at that time was 260 worshippers and there were morning and afternoon Sunday schools with 60 – 75 attending.

Thomas Corner, Society Steward, who signed the Return, was a 36 year old Grocer, who lived at 18 Garden Place in Stockton with his wife and family.  Thomas Corner also signed the Return for the ‘Bethel for Seamen & Others’ which seemed to be a joint mission by the Primitive Methodists, Wesleyan Methodist Association, Baptists, Presbyterians and Congregationalists.

By the end of the nineteenth century there were three Primitive Methodist chapels in Stockton – Paradise Row 1866, Norton Road 1876, and Bowesfield Lane 1887 – together with some mission rooms.