the agency of persons lightly thought of in the world's estimation 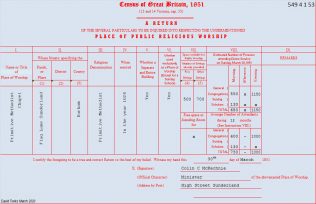 Sunderland Flag Lane Primitive Methodist chapel, in a small alley in a poor working class area of the town, was first opened in September 1824, two years after Primitive Methodists missionaries “commenced their regular work in Sunderland.” Flag Street was brought about by “the agency of persons lightly thought of in the world’s estimation .. the active agents in the erection of this building were mostly labouring men of small means, that had only been for a short time brought to God.“

The opening is described in the Primitive Methodist magazine by Nathaniel West who in masterly understatement notes that there was an eventful story behind the buildingof the chapel. Opening services were held on Friday and Sunday 3rd and 5th September 1824. Preachers were Brothers J Farrar, J Nelson, J Gilbert, F N Jersey and N West.

With the chapel schools for 600 were built. The gospel spread quickly; by 1858 within the borough of Sunderland there were 6 chapels and 6 Sunday schools, with 244 teachers, 1275 scholars and 786 society members.

In March 1858 there was a major problem, described in the Primitive Methodist magazine by John Lightfoot. Major sewer repairs in the road behind the chapel caused the back wall to “shrink” and put the building in danger of collapse. The society became trapped in a protracted legal dispute between the corporation and the contractor. The rebuilding cost the society £600; they hoped that £405 would come from arbitration in the legal dispute.

The chapel re-opened from 23rd August 1858 with services and a tea meeting for 700. Speakers included Rev W Sanderson of Kirton Lindsey, Rev S Antliff of Nottingham and John Halcro.