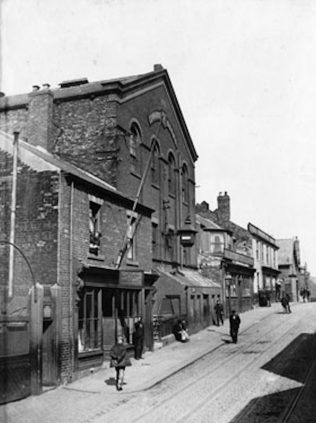 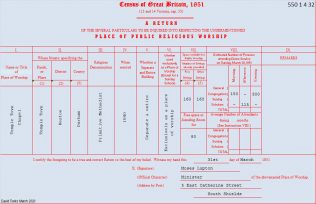 The opening of Temple Town chapel is described in the Primitive Methodist magazine by William Eckersall:

Temple Town is the west part of South Shields, where we have had a preaching station and a society for a number of years. But from the want of a suitable place of worship, we have not reaped fruit to that extent which we ought to have done. On one occasion, a society of upwards of one hundred members was broken up by being expelled their preaching-room.

Under the superintendency of Mr. North, the station was visited with a remarkable outpouring of the Holy Ghost; believers were quickened, sinners awakened, backsliders reclaimed, and the society greatly increased; so that the preaching place became too small. Arrangements were entered into for to build a new one. The society were called together, the case was laid before them, their help was requested, and they nobly responded; for, in a few minutes, upwards of forty pounds was pledged by the working men of which this society is composed: and in a few months it was nearly all paid into the hands of the treasurer.

The chapel was commenced and finished without any accident occurring.

It was opened on Christmas-day, and the two following sabbaths. The proceeds of these services was the noble sum of twenty-two pounds. It will seat four hundred persons; it cost upwards of three hundred pounds. The seats let well. The debt upon it is two hundred pounds. The Golden system was introduced at the opening services, and fifty pounds pledged for the next anniversary.

Temple Town reappears in the Primitive Methodist magazine in 1859 when a new chapel was opened; the previous one which held 300 was not big enough. The foundation stone was laid by R Wallis on August 1st 1859 and opening services from 24th December 1859. The freehold site, secured from James Young, Esq., J.P., was at the west end of South Shields but contained a ballast hill which had to be removed; the members provided the labour. The new chapel held 600 with room for a further 400 children in the school.

R. Ingham, Esq., M.P.,”spoke of the power of the principle of self-reliance, of which the chapel and schoolroom furnished a beautiful illustration, for they had been erected by a few self-reliant working men, without State patronage or State support.”

Opening celebrations included tea for 900, which must have taken some organising.

Thanks to RIchard Jennings, Newcastle District Archivist, for the picture and continuation of the story.  Information about the subsequent life of the very large chapel is sketchy.  After it was opened in 1859 it served until 1881 according to Circuit Schedules of the time but there are no locally-held surviving records. It was variously known as Corstophine Town or Templetown (both places are on the same stretch of road).