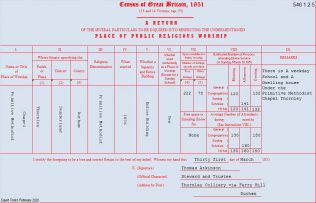 I can find at least three Thornleys in County Durham so this could have been any one of them.   However we also have a 1916 plan for the Thornley circuit – see it here – which lists it as head of a circuit largely made up of other villages to the east of the City of Durham such as Shotton, Haswell and Sherburn Hill. Further evidence that this is the correct Thornley comes from the 1851 Census of Places of Public Religious Worship; the entries for the Easington District which covers that area contain the  Return from the Thornley Primitive Methodist chapel which agrees with the 1836 opening date for the chapel .

The 1895 Ordnance Survey map shows a Primitive Methodist chapel just outside the village on what would later become Bow Street. By 1897 the terraced housing has expanded to meet the chapel. It is still there in 1972, but by 1985 the site is turned into a playground, which is what it is today on Street View.

What happened to the people?