A very important location for Primitive Methodism in Weardale; the surviving chapel has a very well preserved and largely original Victorian interior 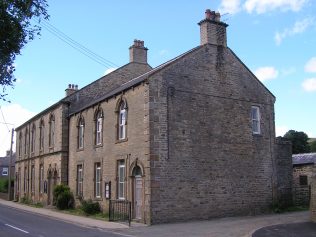 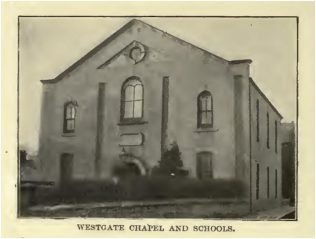 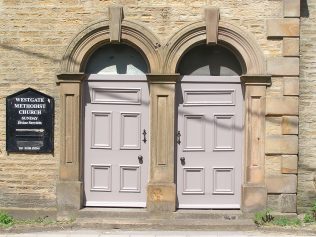 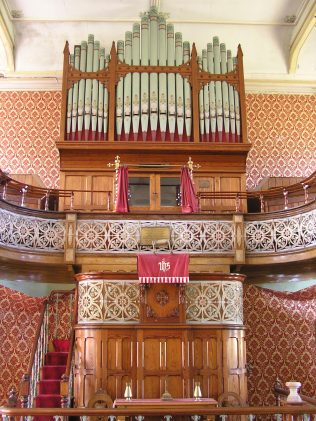 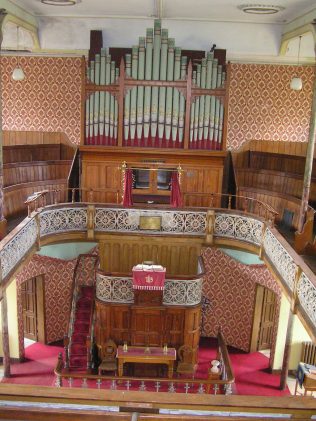 zoom
The chapel interior from the balcony (August 2013)
David Noble 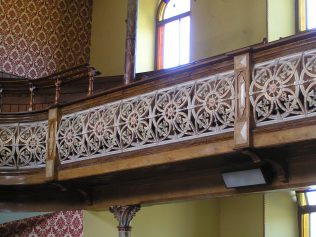 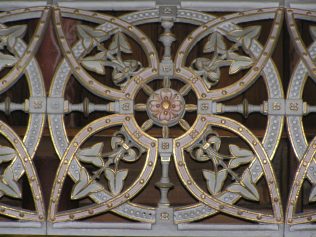 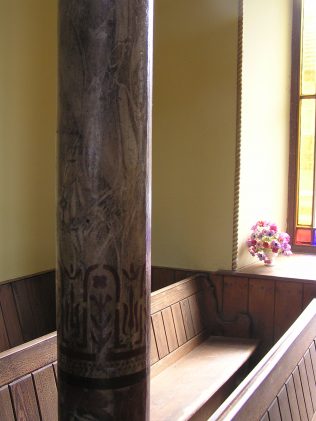 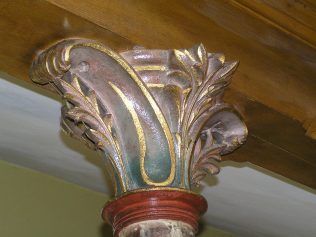 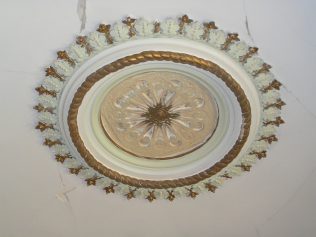 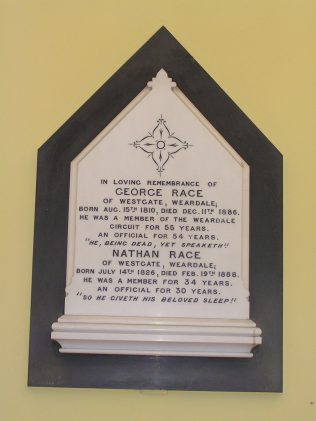 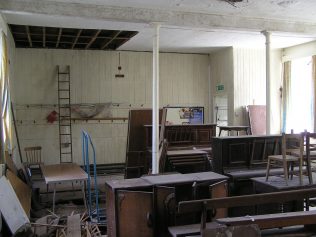 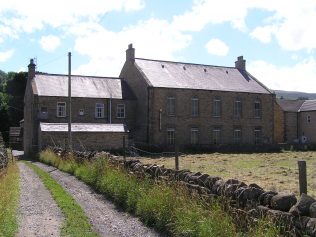 zoom
The chapel buildings from the rear (August 2013)
David Noble 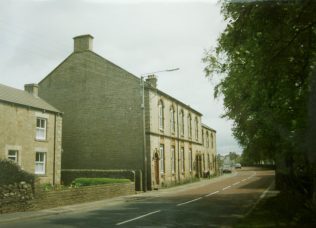 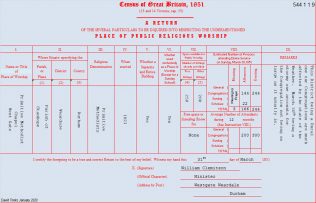 As the Methodist Heritage publication “A Dales Journey in the footsteps of John Wesley” makes clear, “Weardale has a proud history of Primitive Methodism with Westgate at its heart.” It was a principal centre for Primitive Methodism in Weardale and, according to Patterson, the first class was formed at Westgate in May 1822. Petty mentions that, “in the Autumn of 1822 the late excellent and useful Thomas Batty was appointed to Barnard Castle branch of Hull circuit, and soon after his arrival there he and his colleagues visited Weardale and the neighbourhood, and their labours were crowned with uncommon success”. Batty was not working alone, however, and Ritson recalls the importance of the preaching of Jane Ansdale:

“She has been described by competent judges as a woman of more than extraordinary ability and power. Her name is linked with that of Thomas Batty in the great work which founded Primitive Methodism in Weardale. Her first service was to have been held in the open air, but the weather proved too unfavourable, and it is not a little remarkable that the use of the Wesleyan chapel was offered for the service. Wesleyan chapels were not usually open to us in those days; we were too often regarded as poachers on ecclesiastical preserves.”

The first camp meeting in the area took place in June 1823 and one of the early converts was John Dover Muschamp who, Petty tells us, “speedily fitted up a barn for worship at Westgate, which was generally crowded to excess, so that many persons went half an hour before the appointed time in order to obtain a seat.” Kendall describes John Muschamp as “a man of some standing in the dale” who was converted after hearing the preaching of Jane Ansdale. March 1823 saw the formation of the first society at Westgate, thus beginning a revival which, according to Kendall, “swept the dale and led Mr. Muschamp to say exultantly: ‘ I think all the people in Weardale are going to be Ranters’.”

Clearly, the new society was doing well, as Westgate, which had hitherto been part of the Barnard Castle branch, became “a separate branch of Hull circuit, with John Hewson as its superintendent, and G. W. Armitage, a youthful but acceptable preacher, as its junior minister”. Kendall goes on to say that “when to these was added John Oxtoby [otherwise known as ‘Praying Johnny’], who in September, 1824, walked from Whitehaven to Westgate, the revival, which had somewhat flagged, gained fresh impetus.” That impetus resulted in the building of Westgate’s first Primitive Methodist chapel.

Petty, Kendall and Patterson all give an account of an incident that occurred during the building of the first chapel. Kendall’s version is reproduced below:

“The land for the site was given, and the miners in their spare time cheerfully assisted in the erection. Mr. Muschamp might have been seen hard at work among the rest. Thirty days he devoted to stone-getting or walling, and twenty to soliciting subscriptions. But presently the work was brought to a stand. It was alleged that the stones in the bed of the burn served to break the force of the ” spate” and that their removal would endanger the bridge ; hence the person in charge of the bridges of the district, issued his prohibition against the taking out of any more stones for chapel-building purposes. In some way the matter came under discussion before certain magistrates and gentlemen at Durham. “Who are these Ranters’?” was the very natural inquiry. Someone well informed as to the facts of the case and well-disposed too, it would seem, stated what had been the moral effects of the entry of the Primitive Methodists into the dale, especially in having done more to put a stop to poaching than gamekeepers, magistrates and prisons together had been able to effect. On hearing this, permission to take as many stones from the bed of the burn as might be necessary to complete the chapel was readily granted. Once more Mr. Muschamp is said to have shown himself a friend in need. When the trustees were straitened for money and unable to meet the payment due to the builder, he went home, sold a cow and gave the proceeds to the building fund.”

Kendall also provides an illustration of “the original chapel” at Westgate, although a brief comparison of the building’s design and architectural detail with the eastern end of the building in the current photograph certainly suggests that they are different buildings.

By 1831, according to Patterson, this area of Weardale was part of the Alston and Westgate Union Branch of the Hull Circuit, and so it remained until Westgate became a circuit in 1834. Kendall recalls that in 1832 Alston and Westgate had actually more members than the Hull home-branch itself, 751 members as against 631. This fact alone would probably justify Kendall’s description of these two strong societies as “molten and cast in the fire of a great revival” who had “long been numerically powerful and not wanting in officials who knew their own mind, and had a mind to know”. The work continued during what Kendall described, from a national perspective, as “the period of circuit predominance and enterprise”, and Petty mentions that the number of members in the Westgate circuit increased by 115 between the conferences of 1850 and 1860. Kendall also comments that “the whole period from 1860 to 1866 seems to have been a time of ingathering in Westgate Circuit, for the membership which had been 600 when the Rev. H. Phillips entered the circuit in the former year, had risen to 975 when the Rev. P. Clarke left it in 1867”.

During this period the population in Weardale was growing considerably as a result of the growth in industrial activity, principally lead mining, quarrying, iron works, lime works and, later, coal. The Primitive Methodist cause also grew, the consequence of which was that a larger place of worship was needed.

The new chapel was built in 1871. It was constructed adjacent to the original 1824 chapel, which then became the school room. Since 1987, the building has been listed as Grade II* on the Statutory List of Buildings of Special Architectural or Historic Interest. [Buildings that are graded II* are particularly important buildings of more than special interest; about 5.5% of listed buildings are Grade II*.] The building was designed by George Race Junior and Mr. Atkinson to accommodate 500 people; it cost £1300. (George Race Senior was a member of a prominent local Methodist family and a stalwart member of the Westgate society, who had been made an exhorter by the Hull Quarterly Meeting in 1831. There is a memorial to him in the chapel.)

“The chapel is of more than special interest for the fact that it retains its Victorian form in its entirety. It has a full complement of pews in both the gallery and the ground floor, and original windows throughout. Its complete interior displays high quality artistic merit illustrated in the nature of its metal and plaster decorative detailing. It is exceptional in the intactness of both its exterior and interior, which have survived with very little alteration from the early nineteenth century. The attached day school is itself of special interest. These factors combine to produce a chapel of more than special interest in a national context.”

A full description of both the exterior and the interior can be found on the English Heritage web site.

Comparing the current photograph of the eastern end of the building with the illustration in Kendall of the original chapel, it looks, on the face of it, as though they are one and the same building. However, the English Heritage list description suggests that the schoolroom merely “incorporates the rear and west walls of the earlier C19 chapel”. English Heritage also considers that “the external stair against the rear wall suggests that this may have been a first floor chapel”.

The chapel remained in use after 1932 until it closed in 2008. Fortunately, bearing in mind its great historical and architectural interest, the building was taken into the care of the Historic Chapels Trust. Unfortunately, however, roof leaks have caused localised internal damage, as can be seen from the photograph of the interior of the schoolroom. Nevertheless, according to English Heritage’s Heritage at Risk Register, “a package of investigative works and urgent repairs, part-funded by English Heritage, commenced in 2011 and will continue during 2012/13”. As at August 2013, that work is, indeed, in progress.

“A Dales Journey in the footsteps of John Wesley”, Methodist Heritage, 2013

Petty, John, The History of the Primitive Methodist Connexion, from its Origin to the Conference of 1860, the First Jubilee Year of the Connexion, revised and enlarged by James Macpherson, (London: R Davies, 1880)