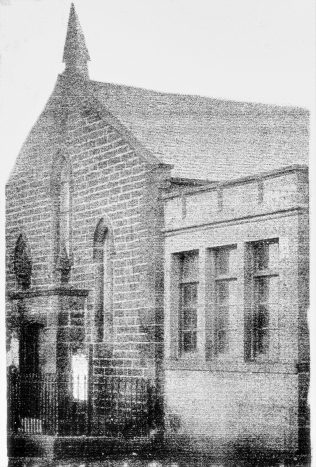 Jeremiah Gilbert’s diary extracts make fascinating reading if only to see how much ground was covered by these early Primitive Methodist travelling preachers every day. In 1838, M Lupton walked 9 miles from South Shields (after having conducted 3 services that day) to Galloping Green Road chapel at Ayton Banks then preached a one and a half hour sermon in the morning. He then walked 5 miles to Chester le Street for the afternoon mission service and on to Waldridge Fell for the 6pm service. The following morning he was at Ferryhill. Phew!

Gilbert’s diary makes mention of Windy Nook only once but I am certain that this was not their first visit to the village. On 21st September 1823, he records “I was at a camp meeting at Windy Nook near Newcastle on Tyne. We had brothers Baker, Wallace, Bagshaw, Haw and Cawthorne; a few got saved and others deeply wounded in spirit. Brother Wallace preached near the camp-ground the following evening….”

We know from Circuit records that the first visit of a Primitive Methodist preacher to the area had taken place in January of 1821 and that such was the enormous response from the public that more preachers were sent out by the Hutton Rudby Circuit to places all over the northeast. The Society at Windy Nook however was not created until around 1838 – we cannot be certain of the date as there are no surviving documents other than some vague Circuit records. Preaching services were held in one of the members’ cottages and were irregular until June 1862 when preachers from Nelson Street Chapel in Gateshead began “revival services”. Membership of the chapel grew considerably after this and so did the Sunday School which began on 22 December 1862.

Following the 1863 Camp Meeting, the Society began soliciting subscriptions for a new chapel and on Tuesday 8th September, 300 people gathered in the afternoon to witness the foundation stone-laying in Albion Street. The service, conducted by the Rev. John Hallam, included speeches and a couple of hymns from the singers (as the choir was known) then everyone went to the Mechanics Institute on Stone Street for tea.

The church building was opened on Saturday 2nd April 1864 with an afternoon soiree again attended by about 300 people. The “Gateshead Observer”21 described the building as “..a neat edifice nearest to the Early English style of architecture” . The interior of the building consisted of a chapel and adjoining schoolroom capable of seating 300 persons, the schoolroom being divided from the chapel by way of folding doors. There was also a small vestry. The cost of the building had been £350 and with £200 collected on the day of opening, most of the debt was cleared very quickly.

The first Trustees at this time were: J R Patterson, Thomas Dixon, Joseph Maddison, Andrew Davidson, Matthew Robson, Thomas Armstrong, George W Honeyman and Surtees Newton. In 1867, these Trustees formed a Chapel Committee to assist in the management of its affairs and finances. From what were such promising beginnings, Windy Nook PM along with Felling, Carr’s Hill and Kibblesworth caused the Circuit the greatest worries with regards to finance. In 1871, Windy Nook held additional services and undertook more collections in the neighbourhood to try and balance their books and reduce the chapel debt. Bazaars and sales at chapels seem commonplace nowadays in Methodist Churches but the first one in the Gateshead PM Circuit to be given approval was at Windy Nook in 1877. There are no records surviving to show the success of this bazaar but by 1883 the chapel was debt free.

The Sunday School continued to grow and Sunday School Union Annual Reports show that in 1898 there were 30 teachers caring for 70 scholars. F R Pickles was the Secretary. This growth encouraged the Trustees to undertake extension work and in October 1906, the foundation stones for a new hall were laid. A large crowd was expected to attend so Felling PM Chapel was hired for the service and the customary tea which followed such events. Surplus funds after the hall opened were invested in the Co-Operative Bank and the Society joined the store in 1923 – their “divi” number was 1480.

There are no surviving Minutes relating to Windy Nook PM Chapel in the archives though the Minute Books from Albion Street were used by Stone Street, and little else known about the chapel. In June 1942, a vote for amalgamation with Stone Street chapel took place following national Methodist Union. This was all agreed to and the Albion Street premises were used primarily for youth work from March 1943 until its closure in 1960/61.