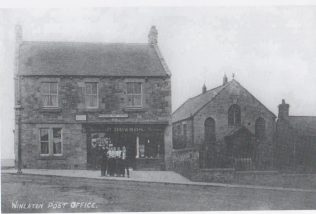 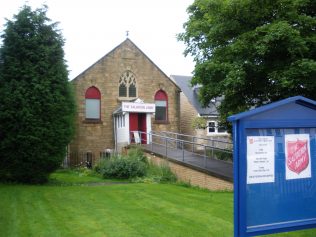 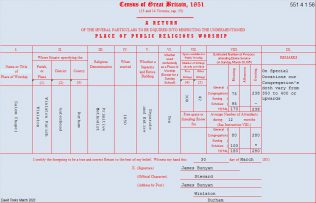 Built 1850.  Altered 1894.  Enlarged 1905.  Became Salvation Army 1964.  When the  Salvation Army took over the building in 1964 they altered the interior to suit their own needs.  The pews were removed and replaced with seating, the boiler was moved, and toilets and a kitchen area were added.

After the Salvation Army ceased to use the building it has now become a private residence.

The earliest society of non-conformists to commence in Winlaton was the Primitive Methodists. They are known to have had a preaching house as early as 1821, on a site near to the Congregational Church. Their place of worship was part of Winlaton Hall, tenanted by Ambrose and John  Crowley in 1753. The following information came from the diary of a Winlatoner

“December 1822. A body of people called the Ranters had their first sermon preached to them. It was said they would not stand six weeks – but behold they stand: then thety said six months, but thanks be to God they stand yet  Aged 16 years (1838).

January: A missionary meeting at the Ranters’ Chapel – Chapel was filled with wayside hearers. Reader think how much they got for the Gospel, well, sir, they got 3s 11d. Sir I leave you to judge.”

The 1st Primitive Methodist “Camp Meeting” (in the open air) was held on 31st May, 1807, at Mow Cop, on the Cheshire/Staffordshire border.  It was organised by Hugh Bourne (1772–1852), a carpenter and Wesleyan Methodist local preacher from Bemersley (Staffs., near Stoke), and his brother James, after hearing an American evangelist preach.  This first meeting was attended by 5,000 people, and 4 heaps of stones were set up for preachers to preach from.  The Wesleyans didn’t approve, and Bourne was expelled in 1808.  The new group adopted the name Primitive Methodist in 1812, but were known as ‘ranters’ by their opponents.

William & Mary Surtees are thought to have been the pioneers of Primitive Methodism in Winlaton.  A society was formed in 1821/2.  Membership varied between 20 & 100.  At the annual conference at Manchester on May 15th. 1827 the District of Winlaton was formed into a circuit embracing 22 churches as far distant as Shotley Bridge and Prudhoe served by two travelling preachers and sixteen local preachers. Philip Bellwood was appointed superintendent of the circuit. He left the ministry in 1828 and settled at Anfield Plain as a grocer where he died in May 1852. Winlaton was the head of the local circuit for 3 years 1827–1829.  There was a PM conference in Winlaton in 1830.   Winlaton was then described as a wild place, but it was thought of as a better centre for the church than Blaydon or Shotley Bridge.  In 1829, after preaching at Winlaton & Blaydon, Hugh Bourne remarked in his journal ‘The work of this circuit appears to be going well.’.  a service at the chapel in about 1850 describes it as being ‘surrounded by the glare of the low-roofed, one-storied blacksmiths’ shops.

. One of the most fruitful events on record in the society was when the Pickering family were introduced to the church. This was about the year 1845, when, after his conversion, Matthew Pickering became one of the most promising ministers in the north. He had worked in the pits from age 9,  joined the Primitive Methodists aged 15, and became a teacher, preacher and mining official..

Lord Ravensworth gave the piece of ground on which to build a new chapel. It was opened for public worship on July 7th.1850, on the following day a tea party was held in the schoolroom. The building was surrounded by blacksmiths shops, and many visiting preachers had much difficulty in finding their way. The seating consisted of forms, some of them having backrests, the choir seats were the old fashioned horse box style.  Long sermons were the norm and there is a record of a sermon which began at 6.00 p.m. and ended at 3.00 a.m. the next morning.

In 1895 the church was completely turned round, so that the entrance to the building is as we see it today. Up to the year 1895 Winlaton was part of the second circuit ( Newcastle) then Blaydon was made a circuit of its own to include Winlaton Mill, Hedgefield,Crawcrook, Blaydon Haughs, Rowlands Gill, The Rev. Joseph Tweddle being its first circuit minister. In 1905 the church was enlarged. Many changes have taken place since 1822, when it was known as the Ranters Chapel and some pessimists you  remember said that they would not last six weeks. I wonder what was the doubt. The writer, not being a native, much of my information has come from my friend Tom Parker. To make it more domestic and homely he furnished me with some members and families who during their lifetime made the chapel a living force for Christianity – Moore family, Ridleys ,Broomes, Misses Gardner, Polly Parker, Mrs. Jewitt,  Jane Ranson, Mrs. Greenfirld, Mr. & Mrs. R.J.Walker, John Greener, Isiah and Tom Renwick, T. Curry, Wm. & Robt. Walker.

Blaydon became the head of the circuit by 1894.