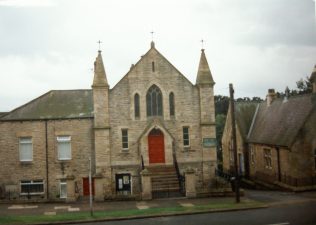 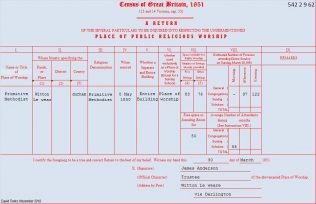 The 1851 Census of Places of Public Religious Worship contains a return from Witton le Wear Primitive Methodist chapel. At that time it was brand new, having opened on May 5th 1850.

The impressive chapel in the picture, formerly known as School Street, was opened in 1901.  It was part of the Crook Circuit.

Although on the Circuit website it is shown as  having in January 2015 4 members, William Patterson, writing in 1909 described it as follows:

“Witton-le-Wear, an enchanting village at the time, was amongst the places visited by the first missionaries, and not without fruit. It is noteworthy that at a powerful service conducted by F. N. Jersey, on May 12th, 1822, a young man found peace, John Snowdon by name, who went to Berwick in 1830 as a travelling preacher, and in the course of his forty years ministry saw many hundreds of souls converted. William Littlefair and a few others were the original members of the class formed by Samuel Laister on August 10th, 1821, and the Snowdons subsequently joined them, the society holding services for a time in the house of the latter. Messrs. E. Muschamp and Co. began brickworks and coal operations at the village about 1846, and additional members were obtained. The first chapel was built four years afterwards, and in it many souls were saved. A beautiful church, costing £1,750, has been recently erected.”