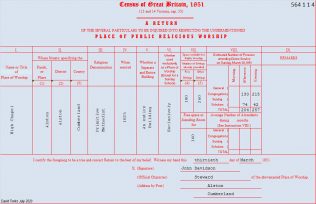 zoom
Alston: Return from the Primitive Methodist chapel in the 1851 Census of Places of Public Religious Worship
transcribed by David Tonks

The chapel was then part of the Westgate branch of the Hull circuit.

Things didn’t work out as planned. In the 1844 magazine J Burroughs tells us that the builder did a very poor job: the gallery was too close to the ceiling and the roof timbers too weak to take the weight of the grey slate roof. Furthermore, most of the Trust responsible for the building was extinct.

They resolved to put things right: by the time it was re-opened with anew trust on 15th/17th September 1843, the walls had been raised by 6′; there was a lighter blue slate roof; the gallery support was strengthened; internal layout was improved; and the flagstoned floor was boarded. Brother John Moore assisted J Burroughs in preparing plans and specifications.

On the 1859-61 1:2,500 Ordnance Survey map, a Primitive Methodist chapel is shown at the junction of Jollybeard Lane and what is now Chapel Terrace on the A689. Is this the 1826 chapel? It is still there in 1899. Has it been integrated into one of the cottages currently on the site?