now underneath the M6 motorway. 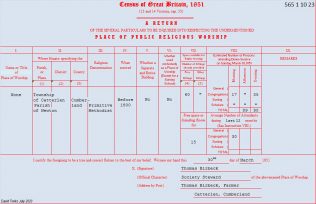 In 1851, the Census tells us that the Primitive Methodist Society met in a preaching place built before 1800.

“New Primitive Methodist Chapel at Catterlen.—A new and elegant Primitive Methodist chapel at Catterlen was opened for Divine service on Saturday, June 30. The foundation stone of the edifice was laid on New Year’s-day, by Mr. Abbott, of Lazonby, in the presence of a large concourse of people, and the satisfactory completion of the building since that event was the means of drawing together many friends and supporters of the denomination at the opening services.

The building, which will accommodate about 110 persons, is an adaptation of the Gothic style of architecture, having eight lancet windows glazed with Hartley’s patent quarry, surmounted by a finial on one end, and a Mark’s cross on the other. The internal arrangements are remarkably chaste and neat. Instead of the old-fashioned high pulpit there is a most beautifully constructed rostrum, 9 feet by 4 feet, with ornamental metal balustrades, lined behind with rich red cloth, and presenting a most beautiful appearance.

The roof is canted and very tastefully relieved by the introduction of stained wooden beads at each angle, and four beautiful lamps on running pulleys. The pews are most admirably arranged, being stained and varnished, and reclined at the back. The free seats stand on metal chairs, combining ease and comfort, and are equal, if not superior, to any in the neighbourhood. Much care has been bestowed on the walls, the plaster on all sides being thrown up into ashlar work.

The total cost of the building, including fence wall, is £125, of which sum the trustees have already realised about three-fourths. The plans were designed by the Rev. W. R. Widdowson, superintendent of the Penrith circuit, and it is to this gentleman’s skill and forethought that the edifice has been erected at such a light expense. Lowthian Brothers, of Plumpton, were the contractors for the masonry ; joiner, Mr. Atkinson, Penrith.

The ground upon which the building is erected was given by Mr. T. Birbeck, of Catterlen, besides £20 contributed by his family.

In the afternoon the Rev. T. T. Dilks preached a most excellent sermon from John i. 14. Tea was provided in a tent adjoining the chapel, and in the evening a public meeting was held, presided over by the Rev. W. R. Widdowson. Addresses were delivered by the Revs. T. T. Dilks, J. Alderson, and J. Tannahill, and Mr. Claig. On the following day (Sunday), sermons were preached in the c Impel, in the afternoon by the Rev. J. Alderson, and in the evening by the Rev. W. R. Widdowson.

In the course of the services, allusion was made to the death of the Rev. J. W. Dodds, a young and promising minister recently doing duty in the Penrith circuit, which event has been the cause of much sorrow throughout the entire district. The weather was most delightful and the congregations large. Thanks are due to our friends Birbecks, Johnsons, Waiting, Sewells, and others, for liberal subscriptions, and to many others, as well as them, for leading of materials.— Penrith Observer, July 2nd , 1867.”

The chapel is clearly marked on Ordnance Survey maps from 1890 at Cross House.  By the 1969 map it has become Chapel House. By the 1972 map it is underneath a slip road to junction 41 of the M6 motorway.