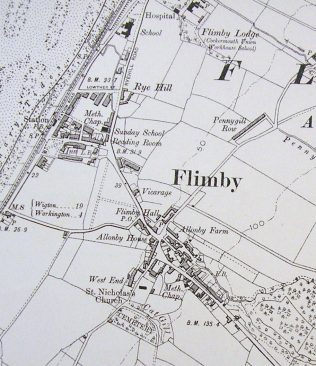 Flimby chapel was built in 1862 at a cost of £209.2.8. It was set well back from the street and at an angle to it. Access was through a shallow porch and a door placed in the street facing,longer (east) side between two windows. The building closely resembled its near contemporaries at Broughton Moor and Netherton/Ellenborough. There was a passageway along the west side.  The chapel was 34 feet six inches by 28 feet. There were 94 lettable sittings in nine pews in the centre of the chapel and 146 free sittings on benches placed along the sides and at the back. There was a platform at the north end with two rowsof pews facing it at each side. Heating was from a stove placed near the southeast corner. Later a porch, 9 feet by 5 feet, and a new doorway were added at the the southern end of the eastern façade and the original porch enclosed to make a cupboard. At the same time a vestry, 13 feet by 11 feet, was added at the north eastern corner. It had independent access via the rear passage as well as a door into the church. This chapel probably closed when the new chapel opened c.1929. The site is now occupied by a two storey residence. Whether it incorporates any of the original structure is a matter for conjecture.  (Cumbria Archive Service, Carlisle DFCM2/145, 255)