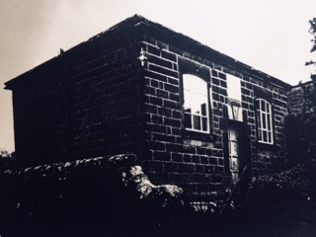 Mr Wilson describes it as a “remarkably neat and substantial chapel” which presented “an aspect of neatness and utility”.  Encouragingly, he also tells that it was legal. It was 24′ x 18′ built of grit stone with a blue slate roof.

The opening services were conducted by Mr J Smith of Butterley and the Rev S Nightingale (General Baptist) of Castle Donington. The following tea meeting on the 15 September 1851 was held in a “capacious” tent lent by Mr S Smedley of Lea. Overall Mr Wilson was positive – attendances were rising and a Sunday School had just been established.

A number of people were thanked for particular contributions, including not only Mr Smedley, but also Mrs Anable, Mr Bidcock (for land and stone), and the misses Ridcock, Mrs Anable and Mrs Hawkins (for canvasing the neighbourhood for subscriptions).

The total cost was £110 of which £58 was still owing, although income from seat rents would reduce that to £50 after 6 months.

The chapel continued to serve after Methodist Union, although there had also been a Wesleyan chapel in the village.  It is now closed and in residential use.