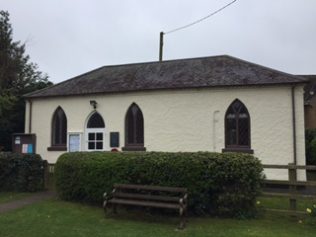 Burnaston is a township in the parish of Etwall. In 1839 a small Anglican chapel of ease was erected. It was later occupied by Primitive Methodists as reflected in Kelly’s 1891 directory, and the society was a part of the Derby 2nd circuit.

This is now the village hall. There appears to be no stone inscription to indicate its past use, though it clearly portrays an ecclesiastical style.