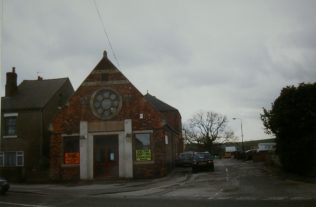 Ebenezer Primitive Methodist chapel is at the junction of Nottingham Road and Orange Street.

The laying of the foundation stone is recorded in the Primitive Methodist magazine of 1882. The chapel was designed to seat 200 and was described as located at Alma Street.

A band of stonework above the central doorway says “Primitive 1881 Methodist”.

The chapel closed in 1970 and in Keith Guyler’s photograph is shown used as a printers.  It is still a printers in Google Street View of 2009