Known locally as 'The Tin Chapel' it was opened in 1903 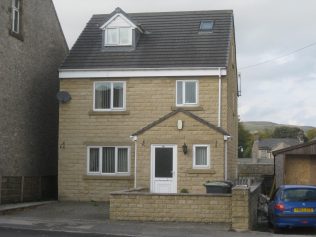 Primitive Methodists came to Buxton and established societies in Higher Buxton but after the building of the London Road Chapel in 1890 many families in the Fairfield district decided that they did not want to cross the town to worship so they decided to set up their own society.

To start with they set up in the front room of 3, Winterton Terrace the home of Mr & Mrs Bradbury. In time they decided they would like their own building so in March 1903 a temporary building ‘The Tin Chapel’ was opened. Even then the society was not content to hold all its meetings within the confines of the chapel and many were held outside on Fairfield Common.

‘Large crowds gathered at these meetings. On one occasion a railwayman, who was trying to sleep, was angered by the noise outside his house, came out and cursed the Preacher Mr Poole, but the critic was soothed with the Preacher assuring him “Brother some day you’ll need the Lord”‘ (David G.Owen – from his book ‘The Old Road to Fairfield’)

The Queens Road Society also had a thriving Sunday School.

The Tin Chapel was something of a landmark in the area. It was painted green and in 2014 there are still people who remember it. A permanent chapel was never built. The Tin Chapel closed on September 30th 1962.The final service was held two days before. The members joined with the Fairfield Road Methodists and formed the Fairfield Methodist Church.

After closure The Tin Chapel was used by the Christ Gospel Church and in the 1990s was used as a joiner’s workshop. In 2014 the building had been pulled down and a house stands in its place.