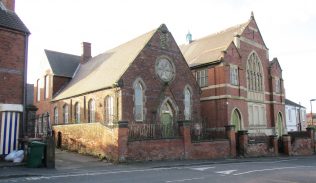 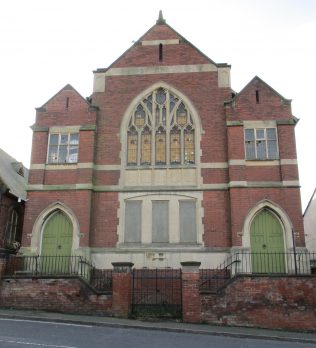 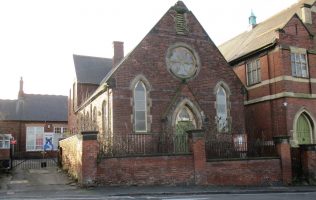 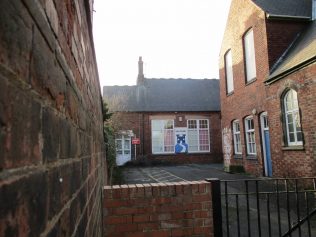 In January 2017, High Cross Bank Primitive Methodist chapel in Castle Gresley consists of two buildings end on to the street with further buildings behind.

The chapel appears on Ordnance Survey maps in 1883-7, located opposite the end of Chapel Street.  By 1903 there is a Sunday School added. The larger building, on the right, carries the date August 30th 1905 on a foundation stone.

The chapel closed in the late twentieth century.  The society joined  with the former Primitive society at Linton Heath and the former Wesleyan society from Station Road, Church Gresley, to form Trinity Methodist Church, which was still active in 2015.  The new society used the Linton Heath building.

On Google Street View in June 2011 the High Cross Banks premises are disused.  In January 2017 they are still disused and in need of love and attention – see the pictures.  There is however a bright shiny chain locking the iron gates giving access to the yard on the left of the buildings.

What will happen to the buildings?

The carved stones on the front of the larger building carry the following inscriptions: