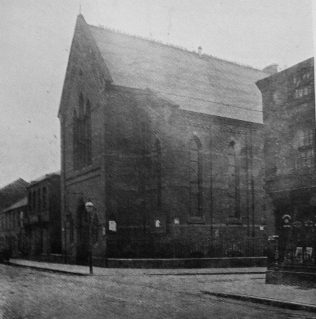 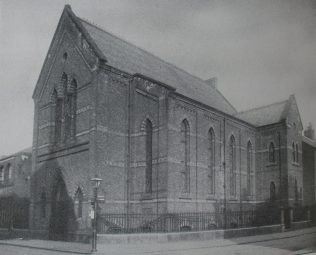 The Handbook for the 94th Primitive Methodist Conference, held in Derby in 1913, tells us that:

“The first chapel in Albion Street was followed by one in Babington Lane, opened in 1841, but in 1842 it was resolved:

“That we give up Babington Lane, sell Albion Street chapel, or turn it into houses as may be best, and erect a new chapel.”

In the autumn of the same year, a piece of land was purchased in Traffic Street, the first deed bearing the date 26th November 1842.  The earnestness which characterised the officials of that day is set forth in the resolution of a Circuit Committee held at that time: –

“That measures be adopted to set the whole society in motion in begging.”

We gather something of the style and character of this chapel when we find in a document headed “important” and signed and witnessed by Thomas Morgan and William Bullock that one John Hackett “gave all the forms long and short formerly in the Babington Lane chapel for the new chapel in Traffic Street.”  A resolution which was passed reads –

“That Brother Morgan be empowered to purchase what he can towards the new chapel , windows, seats, etc., anywhere and everywhere.”

In August 1865 the foundation stones were laid of the present chapel in Traffic Street during the superintendency of the Rev. S Antliff, D.D., at a cost of £4,953.

As we think of the humble position in life occupied by the members at the time, the erection of such a church was no small undertaking.  Difficulties at the time evidently necessitated the schools being under the church.  With the lapse of years and changed conditions, this has somewhat impeded the work among the young.  The Spartan mother bade her son, when he found his sword too short, add a step, and the workers at Traffic Street have for many years by their devotion and sacrifice given the added step which had enabled them to continue a splendid work among the young people of the neighbourhood.”

The 1884 1:2,500 Ordnance Survey map shows us that the chapel was sited at the junction of Traffic Street with Copeland Street.  The area in 2015 is an industrial estate associated with the inner ring road: I know of no signs of the former chapel.

The opening of the Traffic Street chapel by Master Joel Hodgson, C Lace and J Verity on October 20th 1843 is reported in the 1844 Primitive Methodist magazine in a piece by Thomas Morgan. They had raised nearly £200 towards the cost and nearly £650 was still owing. There was room on the plot to enlarge the chapel if needed and to erect a house. The chapel was 42′ square and had a gallery at the front and on each side.

At least half of the account describes the ventilation in the new building – and a piece of equipment that the preacher could use to open windows if  needed; apparently it was not uncommon for gas lights to dim because of the lack of oxygen in the air. Download the attachment to read the account.