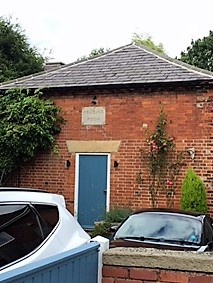 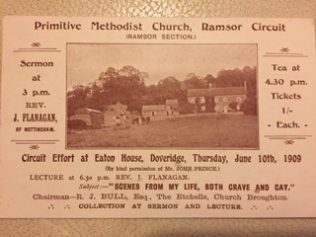 The Providence chapel was erected in 1841, and in 1851 reported an afternoon congregation of 20 in the morning, 30 afternoon, and an evening one of 46.

In 1909 Doveridge was a part of the then Ramsor Primitive Methodist circuit, under the care of the Ramsor minister.

Special efforts had to be organised for the benefit of the circuit and the  photograph of the 1909 circuit postcard, draws attention to the financial motivation with “Collection at sermon and lecture,” together with the organising ability of a scattered rural circuit in arranging an afternoon and evening event with tea at 4.30pm, tickets 1/- each. This was only the Ramsor section of that circuit, that is only a part of the circuit.

It might also be observed that the evening lecture appears to depart from an explicit missionary theme with the title “Scenes from my life, both grave and gay.”

The village history states that the chapel closed for worship in the early twentieth century, and after having been the village reading room is now in private ownership. There is no remaining dedicatory stone from its time as a chapel, the stone above the door now read ‘Reading Room.’ It is in the rear garden, visible from the road, of 19 High Street, Doveridge.

NB Not to be confused with the former Wesleyan chapel on Chapel Green.