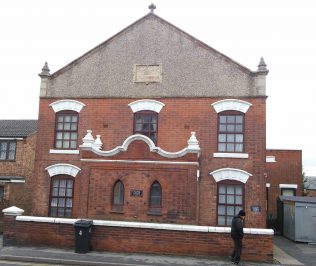 Cotmanhay was one of the places Rev Kendall in his History of the Primitive Methodist church says was successfully missioned by Sarah Kirkland. This was in August 1816.

The Old Ilkeston website says that In the early 1820’s regular services were held in the houses of Job Fretwell at Cotmanhay and Hannah Wheatley at Shipley. Probably because these premises were proving too small, services moved to a barn belonging to the Ancient Druids Inn, a forerunner of the Methodist Chapel, at the corner of Bridge Street and Cotmanhay Road where there  is nowa roundabout.  The Picture the past website has a picture of a procession of people from from Bridge Street Primitive Methodist chapel dated 1920, so it was still active then.

The chapel further down Cotmanhay Road towards Ilkeston which is now Chapel Court was built in 1853 at a cost of £500.  There was also a Sunday School on Wesley Street which is opposite the chapel.

It closed some time after 1995 and has been converted to residential use.