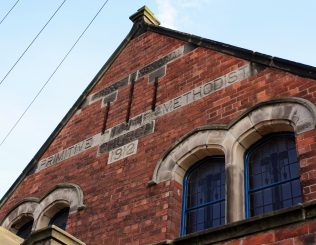 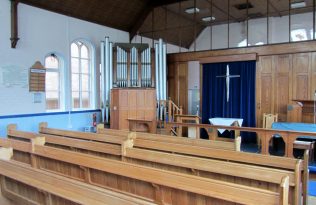 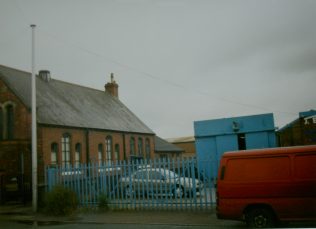 zoom
1912 Hatton; Prince Memorial Primitive Methodist Church as it was in 2002
Keith Guyler 2002

By the end of the 19th century the Primitive Methodist Chapel in Cornmill Lane, Tutbury, had become too small for the growing congregation. At the beginning of the 20th century services were also being held in neighbouring Hatton: first in the Public Hall and then in a converted storeroom belonging to Charles Clark. So it was decided to build a new chapel in Hatton. Fears were expressed that this would lead to the closure of Tutbury Chapel, especially as much of the congregation, including the Sunday School Superintendent and teachers, resided in Hatton. Circuit members, among them John Prince, were optimistic that both chapels would be filled but, as it turned out, Tutbury Chapel, built in 1831, was closed in 1914 and sold in 1920.

In 1910 negotiations began with the Duke of Devonshire to procure land in Scropton Road; John Prince finally purchased the site which was then conveyed to the nineteen Trustees. Fund-raising events were organised and the builder was selected. After the sudden death of John Prince on 20 October 1911, the Trustees decided that the new building should be dedicated to his memory, since it had been largely his vision and generosity that had given rise to the new chapel.

On 5 December 1911 Elizabeth Prince née Howson, John Prince’s widow, laid the foundation stone and the Prince Memorial Chapel was opened on 1 May 1912, impressing all with its functional and attractive design. It was light and airy and had a partition to create a Sunday School, if required; the rows of pews, capable of seating about 200 people, were on a gradual slope so that everyone could see the preacher. In November 1912 a memorial tablet to John Prince was erected by representatives of the Parker Street Circuit and in 1913 the Chapel was registered for solemnising marriages.

Refurbishments and improvements have been carried out throughout the Chapel’s history. Many times they were preceded by fund-raising activities, such as concerts, bazaars and tennis tournaments. Apart from enjoying educational talks and entertainment the Women’s Bright Hour organised charitable events.

Numerous families are associated with the early history of the Chapel like the Clarks, the Allsops, the Wrights and the Morleys, in addition to the Prince and Bull families. Memorial stones and chapel furniture bear their names. John Prince’s daughter, Gertrude, is remembered by many as she ran the Sunday School, in addition to playing the organ. When she died in 1962, she bequeathed her house, Homeleigh in Station Road, to the Trustees of the Chapel as a residence for a minister or supernumerary minister.

Rev. Albert Hearn, who later became a son-in-law to Ida Bull née Prince, preached at both the 37th and 50th Anniversaries of the Chapel. On 6 May 2012 Rev. Steven Wild, Chairman of the Cornwall District, preached to a packed congregation on the occasion of the Chapel’s Centenary.