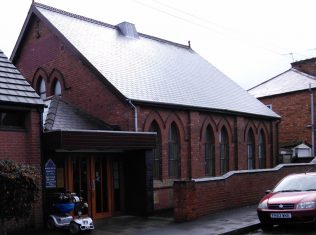 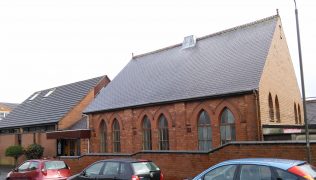 The present Methodist chapel in Sandiacre, opened in November 1981, was built on the garden of the former PM chapel and incorporates the former chapel as a hall.  The PM chapel itself dates from the start of the 20th century and retains a plaque celebrating the opening of the Schoolroom in 1910:

Mrs Greta Simpkin, grand-daughter of the Mr Bailey on the plaque, remembers the ceremonial burning of a piece of paper in the chapel representing the paying off of the debt incurred by the building of the PM chapel. I spoke to her at a concert in March 2014 where we had performed John Stainer’s “God so loved the world” – and she remembers the PM choir singing the same piece!

There was a previous PM chapel in Mill Street founded in 1833. The return by the Steward, Joseph Richards, to the Religious Census of 1851 showed the average afternoon and evening congregations were 60 people, with 63 and 30 respectively attending Sunday School.