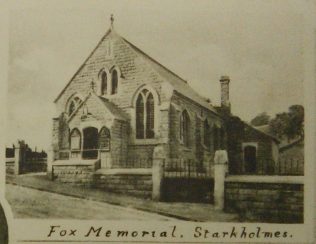 The Starkholmes Primitive Methodist Society dates from 1823 and the Fox Memorial chapel in the photograph dates from 1905.

Hugh Bourne preached at the opening of the first Starkeholmes (sic) chapel on Sunday 8th February 1824 and recorded the event in the Primitive Methodist magazine.

Part of the reason the new chapel was needed was because its predecessor was physically hard work to get to. The first chapel was a modest isolated building on the hillside overlooking Starkholmes, on the east of what is now a continuation of White Tor Road northwards towards Wards End, past its junction with Riber Road (DE4 5JB).

Thomas Carline, a Local Preacher, and hatter completed return for the Primitive Methodist chapel to the Religious Census of 1851 (HO 129/449/2/7/25). It had free seating for 25, and 90 other sittings, and the estimated congregation on March 30th was 19 in the morning, 110 in the afternoon, and 175 in the evening.

Fox Memorial chapel was built as a memorial to Luke William Fox (1866-1905), a butcher and farmer in Starkholmes.  It closed in 1995 and was demolished.  Its site was converted into two cottages which retain some features of the former chapel,

More information is available in an article from the Christian Messenger.

The Matlock & Matlock Bath: Churches and Chapels pages of the Andrewsgen website also has much of interest.