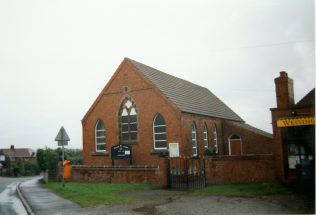 The notes with Keith Guyler’s photograph of Wessington Primitive Methodist chapel was built in 1849 and rebuilt in 1904. The chapel is now a house.

The 1850 Primitive Methodist magazine contains an account by John Dickenson of the opening of Washington (sic) Primitive Methodist chapel. For over twenty years they had been meeting in a cottage but were then given a plot to build by N Wheatcroft Esq of Moor Grange..  Farmers carted the materials, including stone from a quarry two miles away,  for free. The new chapel cost £85 of which they had raised £40. Opening preachers included Messrs Morton, Shaw and Turton

Washington in the magazine account is likely to be Wessington rather than one of the other Washingtons in the UK for a number of reasons:

Do you know better?

The National Gazetteer of Great Britain and Ireland (1868) says that the main employment was stocking manufacture and that the Wesleyan and Primitive Methodists had chapels.  Interestingly, Kelly’s Directory of the Counties of Derby, Notts, Leicester and Rutland records that in 1891 there were two Primitive Methodist chapels in Wessington township.