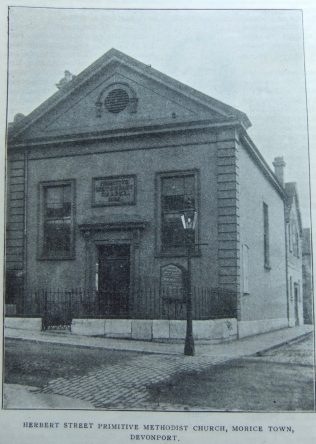 Preachers at the service included Samuel Harding, who described it in the Primitive Methodist magazine, and Rev J Pyer (Independent). Rev J Stock (Baptist) laid the stone, under which was a bottle containing Conference minutes for 1858, the month’s magazine, the preachers’ plan for the quarter and some coins.

Later there was a tea meeting for 250 in the Baptist chapel. Addresses were given by Revs Pyer, Stock, Overbury, Johnson, Mitchell and Pithouse.

The chapel was expected to cost around £500 of which they planned to raise £200. In fact, by the opening they had raised £150, with an anonymous donation of £10 and £10 from W Hicks of Lotwithiel.

The chapel must have thrived, because there’s a further account in the Primitive Methodist magazine of 1866 when it was enlarged with the addition of a gallery and further renovation. It reopened on 11th March; preachers included  N Broadway, Mr Burden, Revs E Shelton, J Ashworth, N Broadway, G Grigg and J Sellix, who wrote the account. There was a celebratory tea for 160.

Where was this chapel? I can’t find it on early maps.

Herbert Street chapel was destroyed in the Second World War.