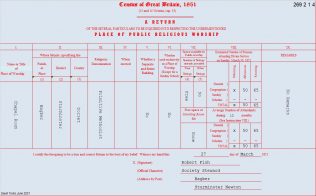 zoom
Bagber: return from the Primitive Methodist preaching place to the 1851 Census of Places of Public Religious worship. Return no: 269 2 1 4
provided by David Tonks 2021

Ref. NM-7/S/2/TS/2/1: Sale particulars of the former chapel at Bagber and house attached to it

There is also the following lease dated 28 November 1853.

Recital: that party 2 are members of the Sturminster Primitive Methodist
Mission and that party 1 agrees to let the below mentioned property
to them.

Rent: The proceeds of the Annual Public Tea meeting

1 to 2: The Primitive Methodist Chapel situated at Bagber, Sturminster Newton

Condition: That the harmonium, bible and hymm books are the property of the Society