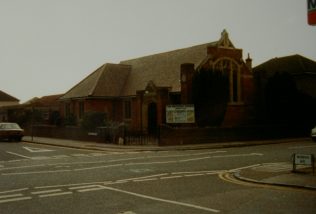 The Ensbury Park Primitive Methodist chapel shown in Keith Guyler’s photograph was opened in 1926 at the junction of Columbia Road and Beswick Avenue.  Its predecessor was opened in 1912.

The Flickr website contains a copy of the booklet issued at the Silver Jubilee in 1951 which outlines the story and many of the people involved.

On Google Street View in August 2012 the site is occupied by flats.