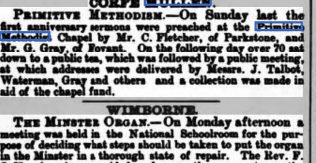 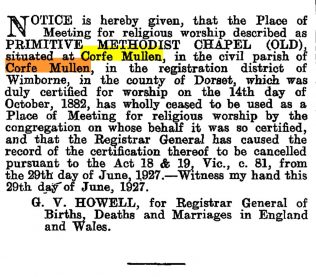 I have started to do the Corfe Mullen Dorset Primitive Methodist chapel history and noticed you do not have it on your site.

We believe (the chapel)  opened in 1882.  The newspaper article of its first anniversary notes who was at that service as ministers.

We believe initially we were attached to the Weymouth circuit under the West Indian minister Mr Cosin visit.

We are also linked to the person called the Lytchett poet who was a Primitive Methodist minister John Parsons, as Corfe Mullen and Lytchett boundaries were not well defined then.

Then under Poole (circuit), we had Mr Peck who went on to do the children’s home and we also had Mr Wheeler.

In and around 1927 the Chapel became empty. We do not know what happened to memorial stones there or the graves.  We can’t find any record but (it is) clear it is consecrated ground because in parish meeting notes at a later date there was a decision whether to reuse.

The Congregation  was moved to Wareham  Road and  it became United Methodist.

Eds note: Ordnance Survey maps from at least 1888 show the chapel at the north east corner of the junction of Chapel Lane and Chapel Close (known earlier as Wyatt’s Lane).  The “Primitive Methodist chapel” disappears between 1928 and 1934 but a building with a similar footprint is still there in 1982, labelled Laurel Bank. There is no sign of the chapel on Street View. A modern bungalow is on the site.

This page has been added by an editor from information supplied