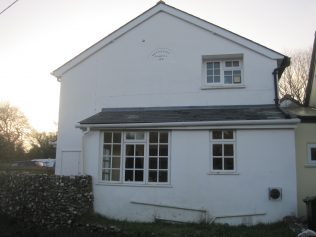 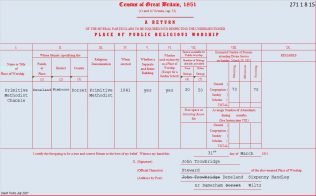 zoom
Deanland: return from the Primitive Methodist chapel to the 1851 Census of Places of Public Religious worship. Return no: 271 1 8 15
provided by David Tonks 2021

Deanland, Salisbury Circuit.—Deanland is a hamlet in the parish of Sixpenny Hanley, County of Dorset. In this place a chapel, 24: feet by 16 feet, was built about twenty years ago, and was freed of debt within the last two years.

The materials used in the roof and door were English fir which had partly perished. The chapel was in a dilapidated state, and had been too small for some time. About twelve months ago, brother Moxem supplied a piece more land, and on May 28th, 1861, we had a foundation tea-meeting, and promises were obtained tor the re-opening. The chapel is now 36 feet by 18 feet 6 inches, in the clear, and about 16 feet to the wall plate. It has folding-doors, a good red deal floor and oak joists, a platform five feet wide, where the harmonium is placed, and the singers stand on the right of the preachers ; six good windows, good red deal roof and two ventilators in the ceiling ; air bricks are placed under the floor and in the roof, it is covered with slate, and is now a substantial plain building.

On Sunday, July 21st, 1861, this chapel was re-opened. Mr. Jackson, of Shaftesbury, (Wesleyan), preached in the morning at half past ten, and half-past two in the afternoon, and the writer at six in the evening .The chapel on each occasion was crowded, and one soul professed to obtain salvation. On Monday, 22nd, we had a public tea, when a large company was present. The meeting, after tea, was addressed by Brothers Flemington, Herrington, Kerly, Bennetts, Hains, and the writer. The promises made at the foundation tea-meeting were paid in, and about £20 were realized.

The total cost of the enlargement, land and deed included, will be £90. The collections at the opening amounted to £5 2s. Profit of tea-meetings, £5 5s., and promises, &c, £24 15s., total £35. We shall have other reopening services with a few more promises to come in, when we hope to make up £10. To all who have helped to raise this house of prayer we return our sincere thanks.

The return from the Primitive Methodist society in Deneland (sic) to the 1851 Census of Places of Public Religious worship showed that they were meeting in the 1841 chapel. The return was completed by the steward John Trowbridge.

The chapel is marked on Ordnance Survey maps until 1955. On Google Street View in June 2011 it is in use as a house. It retains its date stone.