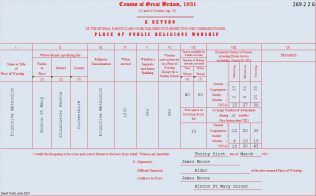 The return from the Primitive Methodist chapel in Hinton St Mary to the 1851 Census of Places of Public Religious worship reports that the society was meeting in a chapel erected in 1830.

“Sturminster Newton Station.—Dear Editor, Although we are not doing much in the converting work in this station, we are doing a little in providing accommodation for the people. … ….

Hinton St. Mary is about one mile and quarter from Sturminster. Our people have preached here for more than thirty years ; the greater part of the time in a chapel rented to us by Mr. J. More (the same man as submitted the 1851 return?), who made it over to the Connexion, by securing a life-interest in the chapel of £2 10s. per year.

For some time the cause flourished, but some unpleasantness occurred between certain parties which checked the good work, and the cause became very feeble, and has been so for many years. The chapel got into a dilapidated state, not fit to worship in.

We bought the property, and sold it again for £182, securing first a piece of the garden on which to build a chapel.

On Wednesday, August 11th, the ceremony of laying the foundation stone took place ; J. F. Rutter, Esq Mere, laid the stone, and delivered an excellent address. We held and public meeting after. J. F. Rutter, Esq., gave us a practical speech Rev. E. Stephens, and the writer also, addressed the meetings. The Lord was with us, and I trust good was done, and that this event will be the means of giving a fresh impetus to the cause.

We had a good company both at the tea and public meeting. We raised nearly £15. The contract for the chapel is £139, towards that sum we have, including a few promises, £50. We hope to raise £30 more by the time the chapel is opened. George Beale”

The 1886 Ordnance Survey map shows a Primitive Methodist chapel on the west side of Marnhull Road, south of its junction with Veal Lane. Does any of the chapel still exist?