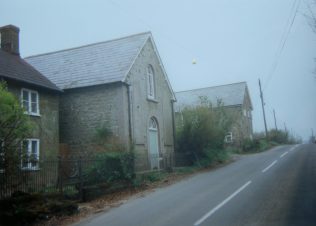 Keith Guyler’s notes which accompany this photograph simply say “Melbury, Cann Common (Shaftesbury section), (SE of Shaftesbury)”   and that is not very precise.

There are references to Primitive Methodist activity and more than one chapel in the area, so this chapel in the picture could be one of several:

Initially I wasn’t sure where to look – Melbury Abbas?  East Melbury?  Cann Common?

However, the chapel in Keith Guyler’s picture still exists in 2017, although not in use, on Dinah’s Hollow, south of Cann Common.  It is marked as a Primitive Methodist chapel on the 1888 and 1929 Ordnance Survey maps of the area .

There is a further complication.  Whilst working through accounts of chapel openings in the Primitive Methodist magazine, I came across the following account of a chapel opening at Melbury (“about two miles from Shaftesbury”):

“At Melbury, a village about two miles from Shaftesbury, we had a society and a considerable congregation worshipping in a cottage for some years ; but on April 5th, 1846, a newly-erected chapel was opened by brother Rowland Hill, from our Sherborn branch. The congregations were large, the collections satisfactory, and the services powerful.

The chapel is neat, well lighted, quite suitable for the village, and is connexionally conveyed to trustees ; the seats are all let, several persons have promised to collect sums of money to lower the debt, the trustees are in easy circumstances, and the chapel is well situated for a congregation and Sunday school, there being no other chapel in the village”

Is this the chapel in the picture?