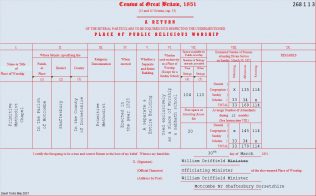 zoom
Motcombe: return from the Primitive Methodist chapel to the 1851 Census of Places of Public Religious worship. Return no: 268 1 1 3
transcribed by David Tonks 2021

The new chapel had a front gallery 3 pews deep and measured 20′(w) x 28′(l).  Mr J Smith gave the land and there was a great deal of volunteer help with the chapel’s erection.

Motcombe became the head of a circuit.  By 1838 it had four hundred and forty members and rising. “The converting work is moving on, and our societies are doing well; and we have an increase of religion and members.

The return from Motcombe Primitive Methodist chapel to the 1851 Census of Places of Public Religious worship shows us that the place was thriving with afternoon and evening congregations of well over 100 and morning and afternoon Sunday schools. The return was completed by the minister, William Driffield.

On the Ordnance Survey map of 1887 Providence chapel is shown on the east side of  The Street north of its junction with Motcombe Road.  It is still there in 1929 but has disappeared by 1980.