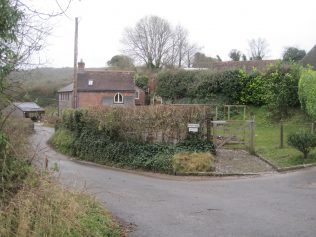 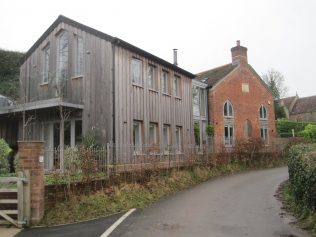 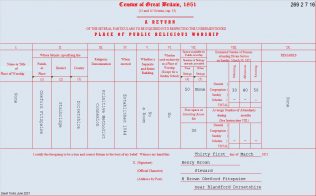 zoom
Okeford Fitzpaine : return from the Primitive Methodist preaching place to the 1851 Census of Places of Public Religious worship. Return no: 269 2 7 16
provided by David Tonks 2021

At Okeford Fitzpaine, the return from the Primitive Methodist preaching place to the 1851 Census of Places of Public Religious worship was completed by Henry Brown, the steward. They met in a room which held 50 people and three Sunday services were attended by 30, 40, and 50 people  respectively. They met from 1844 in a room

Okeford Fitzpain (Fitzpaine) Primitive Methodist chapel was opened on March 23rd 1859. The society had previously met in the cottage of Mrs Brown, an “aged pilgrim”. but when membership outgrew the space, the Brown family gave part of their garden for a chapel.

Preachers at the opening were Revs J Bendle, JS Brown and T Smith (Mere), together with  “a pious soldier”.

The chapel is marked on Ordnance Survey maps of 1887 and 1902. On Google Street View in 2011 the chapel still exists, overgrown, but secured with bricked up windows, a substantial metal door and padlocks. The date stone is sill there although not readable, and there is a Wessex Water “keep out” notice.

Thanks to Mark Churchill for the pictures of the chapel – and the Wesleyan chapel in the village on our partner Wesleyan site. Mark reported that the owner  told him that in 2012, the year after the Street View picture, the chapel was restored as a holiday let.  Three and a half years ago the current owner created this very sympathetic extension for his home.