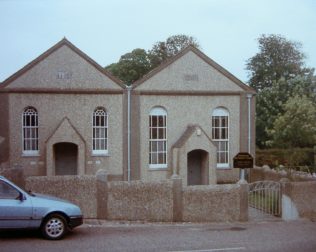 In 1882 a village committee raised £250 for the building of a Temperance Hall next to the Church and a Band of Hope was established for young people. The hall was initially run by both Churches in the village but the Methodists had assumed full responsibility by the 1930s.

Keith Guyler describes the building at the side of the chapel as a School from 1906 rather than a Temperance Hall.  What is the story here?