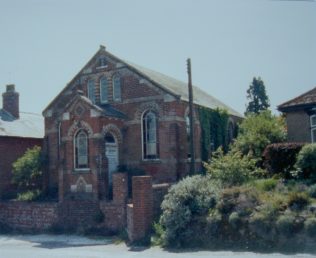 Handley Primitive Methodist chapel (also known as Sixpenny Handley) was built in 1835. It was one of the 52 buildings burnt in a calamitous fire in May 20th 1892 which started in a blacksmith’s shop. After rebuilding, it served until 1979.

After closure of the chapel, the Society remained on the plan until 1990 as Methodists conducted services in the parish church once every 2 months. At the time of Keith Guyler’s picture in 1988 it was in use as an antique dealer’s store.  On Google Street View in 2011 there is no sign of commercial activity; it looks like it is in residential use.