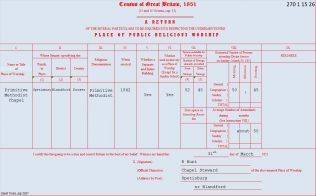 “SPETISBURY is a village which contains about eleven hundred inhabitants.  Among the Catholics it is a place of renown, having a large convent, which is said to be the richest in England.

It is about eight years since the village was missioned by the Primitive Methodists.  For several of these years a small house was hired to preach in, for which there was paid the yearly rent of five pounds four shillings.

In the spring of 1842, a cottage and a garden were purchased; the former of these is let for three pounds a year; and on the latter there is a recently-erected Primitive Methodist chapel, the dimensions of which are twenty-four feet by sixteen, and, from the floor to the wall-plate, ten feet.  As it is ceiled up to the rafters, its height, from the floor to the ceiling, is thirteen feet.  The walls are built of good hard bricks, the building is covered with the best blue slates, and has a ridge of lead on the whole length of the roof.  The floor is of the best Memel deal, and rests on oak sleepers. It has four sash windows, in each of which the upper sash only is hung; and it is accessible by folding doors.  It has fixed grates, by means of which the floor is kept well aired, and has an excellent ventilator in the ceiling.  It contains eight good pews, which are let, a small communion pew, and a number of free sittings.  Ninety pounds were expended in erecting it.  Towards this sum, Mr. Hunt, our circuit steward, gave ten pounds, and collected thirty-three.  The collections at the opening services were seven pounds one shilling and sixpence.  These services took place on the 3rd, and the 5th of June, 1842.  The officiating ministers were Mr. Hammer, Independent, and Mr. Tuffin, Primitive Methodist.  The services were well attended, and the Divine presence crowned the labours of those who conducted them.

I may add, that the chapel is settled on trustees, for the Connexion, according to the provisions of our printed Deed-form. Since it was opened it has been well attended, and the society connected with it has increased two-fold.

transcribed from the Primitive Methodist magazine by David Tonks

The return from the Primitive Methodist society in Spetisbury to the 1851 Census of Places of Public Religious worship showed that they were meeting in the 1842 chapel. The return was completed by the chapel steward, R Hunt of Spetisbury.

Ordnance Survey maps of 1888 and 1901 show a Primitive Methodist chapel located on the eastern side of the main A350 road, just south of the garage. By 1956 it is marked as Ebenezer Methodist church. In 1972 it is marked Evangelical Free Church.

On StreetView in 2014 it can be seen at the back of Rose Villa, apparently in residential use, although still bearing its date tablet.